I’m literally just in the door.
This evening I went with a mate to the Cockpit, one of Leeds’ funkiest music venues. I’m fairly confident that they have fully kit out stage rooms – but we weren’t it one of those! We were in this tiny, oddly shaped, freezing cold attic! With a corrugated style roof.
We were there to see the remarkable Lindi Ortega – a Canadian singer songwriter. She appears elf-like, then astounds with a phenomenal vocal range and the most implausible volume from such a petite frame.
On top of that; she’s hilarious! From the moment she stepped onto the tiny stage, she owned it. Accompanied by only a guitar; she played most of the songs from her new CD, as well as covers of Janis Joplin (Mercedes Benz) and Johnny Cash (Delia).
I can’t tell you how great she is…but I can show you…
Every song packed a punch. Every one sounded distinct with powerful lyrics and that voice…oh my gosh…that amazing amazing voice! 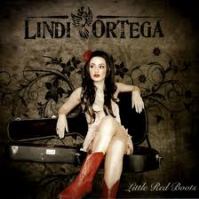 If you get the chance to see her, take it! Book it the second you see tickets available. You. Will. Not. Regret. It.

There were two warm up acts – the excellent ‘In fear of Olive’, a Yorkshire based quartet with a sort of revivally-rock-folk thing working very well for them.
I really enjoyed their set and have a feeling that one day in the not too distant future I’ll be bragging about how I once saw them in a teeny tiny venue and how I threw the bassist completely by asking for a CD!

The second warm up group were the Clifford Village Band. Though they were very enthusiastic and the two leads seemed to have decent vocals – there were some real sound issues and with the instruments dominating. Which included flutes and a saxophone looking thing.

To be honest, I was left a bit cold (and not just from the venue). The lead singer had a very manic sort of energy that the rest of the band did not seem to share at all.

Additionally; they kind of provided their own harmonies while Lindi was singing. Which was…creative yes, but also a touch on the annoying side.